The one and only family trip to remember


For a short time I had a family in India. But at least three friends I knew I could count on. We had different cultures and backgrounds, but we have found more things in common. For sure they made the Indian culture shock more bearable for me (miss you guys😗).

So they were Ferhan from Turkey, Karyati from Indonesia and Zu Lien from China. We've been living together for 2 months and at the end we've realized we haven't used the time together well at all; meaning we haven't had too many activities that included all of us. As our schedules were quite hectic, we went to only one "whole-family" trip.

If I look back, this one-day trip to Tirupati - a famous South-Indian pilgrimage place - was the most organized one I went to in India. Not because of us. We were actually too tired to search for buses and I haven't really understood how things work there, how much do we have to walk, what is accepted etc., so we've paid for an organized trip which included the car and the driver, the entry ticket to the temple plus breakfast and lunch. And we've started off on a Sunday morning at 7 a.m. in the beginning of March to have an authentic Hindu experience on one of the world's oldest hills.

The Lord of The Seven Hills 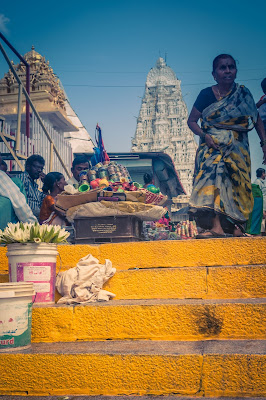 Tirupati is a town in the state of Andra Pradesh, about 150 kilometers from Chennai; it is known as a land of temples and a paradise for pilgrims. There are seven hills near the town, and on the seventh peak the world's second richest temple is located. It is called Sri Venkateshwara Swamy Temple, or by its popular name Balaji Temple. Or Govinda (as we've learned it in the queue while waiting to get inside the temple); Lord Venkateshwara being an incarnation of Lord Vishnu, the Universal Preserver.

According to a legend the seven hills represent the heads of the snake god, Adisesha, on the top of which the shrine originated in ancient times.

It is said that daily 50,000-100,000 pilgrims visit the temple, thus being among the most visited Hindu spots on the planet. So I guess it is not a surprise that sometimes people stand in the queue for 10-12 hours.
Why? Because many people have a deep abiding faith in Tirupati. Almost every devotee donates something to the temple, whether cash, gold, jewelry, ornaments, hair etc.

We've had luck. Or true hearts.

As we have waited for only 3 and half hours to get inside. And see the idol of  the innermost sanctum: Govinda. For about one minute.

But I have just jumped over a few things. So let's go back.

First we have arrived to the town of Tirupati with other temples to visit. We were thinking about visiting one, but then the queue was too long (we had no idea about the line that was waiting for us in the Balaji temple). So we've just had a walk around the temple, checked the souvenirs and I've seen a huge and amazing rangoli (a form of decoration, on the floor) at the entrance.

Because of the crowd we kept losing each other and it was so hot that we continuously felt like melting.

At the end we didn't buy any souvenirs, but there was a kid painted in blue who kept asking for money and finally we gave him as we were tired and scared of his look. Otherwise I can't stand people who insist too much on the same thing. 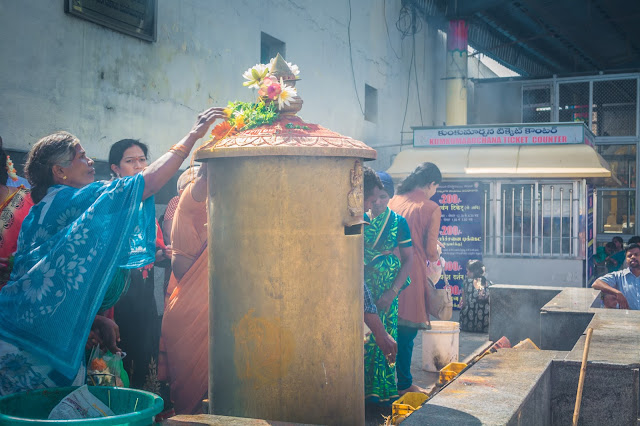 Soon after we left to the Balaji temple. I was thinking a lot about how nice it would be to go on the road with a cool bike. Because the views were spectacular. And the feeling...

There is a dress code for this temple, so on the way up to the hills we've had to change our clothes. Women have to wear saree or kurta with churidar. Karyati, Ferhan and I opted for the latter option, Zu Lien was braver and she went for saree. We had luck - again - as Indian women helped her to put on the saree (it is not an easy procedure at all).

Time for a footnote:

My kurta was made by one of my colleague's, Nikhath; she designed it and borrowed it to me for this special occasion 😊 I loved wearing it.


It took about an hour to arrive to the temple with car. This was the easier option. Many people choose to walk up to the hill on foot, or even on their knees...

We arrived to Tirumala and the driver tried to explain us to leave everything in the car. Including our shoes. It took a while for us to understand that we won't have any other place where we could leave them and we will come out at a different place. The problem was that the ground was hot and it hurt. But after a few steps we got used to it. As to everything else.

He repeatedly told us to leave our cameras and mobile phones in the car also. However we thought we are smart and we can hide a phone somewhere, to make some memories on the way, but it didn't even cross our mind that the security check will be similar to the one at an airport. So of course, Karyati's phone was confiscated. We got it back after we came out of the temple.

We've had a long walk. And a long waiting line. We couldn't even see at first how long it is, as we had to go through narrow lined corridors. Full of people. Luck that we've had enough water with us. Tirupati is a popular pilgrimage place for Hindus and holds a great significance; however I haven't really seen foreigners there.

During the way and the waiting hours we have found out some important things things. Probably the most important one was that many (or most of the) people come to Tirupati with a desire, a wish and it is said that if your desire is true and strong enough it will become true.

The time has come to make our wishes.

It wasn't hard to learn and to remember forever the name of Govinda as it was recited by most people all the way. After a while we've joined the chanting: 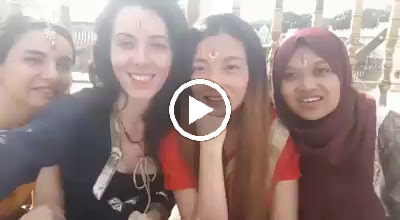 The hours we've spent waiting to take a look at the darshan of the Lord made my mind silent and my desire clear. I've had some moments of oneness, of fascination and of tranquility.

We were quite impressed by the temple, built in Dravidian style many centuries ago. However it was hard to have a closer look at what is surrounding us, because we had to go with the flow of the crowd, that pulled us inside the temple, then we saw the idol of the deity for a little while, then the crowd pulled us out.

After getting out we touched the walls of the temple with our heads together with Ferhan for a few minutes. I still don't know the meaning but I saw other people doing it and I felt like doing it also.

Then we went on and we received the famous laddu prasada, a sweet and delicious sacred offering, made exclusively in Tirupati. What we didn't know is that we should have taken at least a part of the prasada and shared it with others. And we were very hungry already.

So actually I don't have any photos from the inside. But I've just read that National Geographic made a documentary that is taking the viewer inside Tirupati Tirumala.

We couldn't miss to make photos as soon as we got back Karyati's phone:

And as we were walking out on the road, I suddenly saw two elephants. It was the first time I saw since my stay in India. They were simply beautiful.

They were giving blessings with their snouts. But only after receiving money. And I left my last 100 rupees cash in the temple as a donation. So no blessing from the elephants.

The beautiful part of this story, except the sublime moments when we saw the idol, is how muslims, christians and atheists could go to the same sacred place with a certain belief. It is a day to remember :)

India is full of contrasts, and opposites fit well together here. I guess this trip illustrates the concept. However I would recommend to visit Tirupati to anyone who comes to South-India. I can't tell the reason, but I am sure it will be a day to remember.

What would you desire from the Lord of the Seven Hills?