június 10, 2017
Mid April the Hollywood of India was on our visiting list. We went without concrete plans, just to escape Chennai for a few days.

After traveling to Mumbai (or Bombay) I have realized that probably while I am in India I will never have any trip (or day) without unforeseen incidents. My life was filled with random moments even before my arrival, but here everything was multiplied by at least ten. Yes, I had moments of despair, but now I believe ultimately the lesson is about learning how to handle obstacles without becoming desperate.

The challenges started with our departure from Chennai, when Karyati, my friend from Indonesia, caught the flight only by miracle. That was the moment when I've become sure that time can be both expanded and narrowed.

But after this early-morning stress, the flight itself was a blessing. When we have arrived, around 7 am to Mumbai, the friends whom we were supposed to meet were still sleeping so we have googled the closest coffee place, Lucky Cafe, but we didn't have luck.
Lucky Cafe was nowhere, and I almost stepped on a dead rat in the middle of the street.

After breakfast and a bit of rest, we hit the road to the Southern part of Mumbai. We chose to try public transportation and we've experienced a bit of metro and train. Renato from Colombia joined us, actually he was our guide in Mumbai. While we were waiting for the train a man suddenly bended down to the ground and kissed Renato's shoes then he asked for money. All this happened so fast that it took some time until we could react.

On the train we couldn't find the women-only carriage, so the heat wasn't the only cause that we've been sweating. But we got off intact. Tip on how to survive similar situations: be careless, behave normal and don't think about anything, but especially not about the anomalies of the situation. 😉

Our plan was to just jump into shopping on Fashion Street, as all our Indian friends told us that this is a real must if we go to Mumbai and we can find a lot of things very cheap, we just have to show our bargaining skills. So we looked up the place on Google Maps and went right there.

But it happened again: we couldn't see any shops on the street. We even asked local people, without any result (of course). After quitting the quest of finding Fashion Street in the afternoon heat, Renato has shown us some impressive architectural pieces which mix countless influences, including Gothic, Victorian, Art Deco and Indo-Saracenic.

I guess if buildings could speak they would tell some hell of a stories. At least, this is what I felt while I was walking on the street, staring at them and wondering happenings have they witnessed during the centuries.

Of course we couldn't miss to take some regular tourist photos in front of Gateway of India. It is the most important landmark of the city, and an emblematic one for the country.

History Fact: Gateway of India was constructed to memorialize King George V and Queen Mary's visit to India in 1911 and inaugurated in 1924. I was a bit disappointed by the fact that it is so new.

But meanwhile as I was talking to Renato I've realized I know more Portuguese than I've thought and this just made my day.
Obrigado! 😊 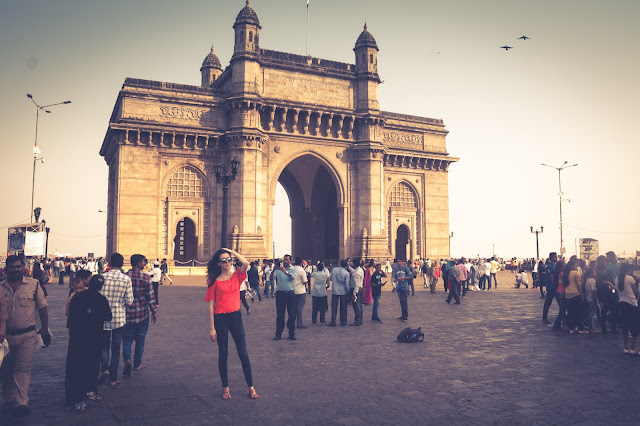 Mumbai has too many places that are worth seeing and the distances can be quite big, so it was hard to choose what to check and what to leave out on the second day. Finally we have decided that we want to see the Global Vipassana Pagoda.✌
In the deep of my heart I feel I am a buddhist, so no wonder that I wanted to go there. However I was a bit disappointed - and I had a similar feeling to that one in Auroville; that for some reason is not authentic. Then I found out that the pagoda is a perfect replica of the Yangon's Shwegadon Pagoda in Myanmar.

But still, it is considered an architectural wonder as it contains world's largest stone dome built without any supporting pillar and enshrines genuine relics of the Buddha.

Its aim is not only to promote peace and harmony, but to express gratitude to Gautama Buddha, to reveal the truth about His life and His teachings and to provide a place for the practice of Vipassana meditation. The Pagoda has the capacity of accommodating over 8000 meditating people at a time. 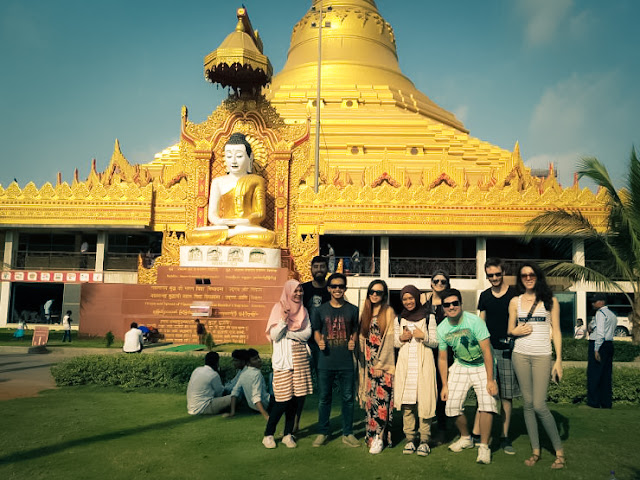 As India is the country of contrasts, after obtaining the peace of mind at the Pagoda, we have permitted ourselves to try Indian bidi (and bong).

Before we didn't even know bidi exists; after we have found out that usually auto drivers smoke it. Basically bidi is a small hand-rolled cigarette made of tobacco, wrapped in a tendu or temburni leaf and tied on one or both ends with a colorful string. And they are extremely cheap, in Mumbai their cost was 15-16 rupees (around 25 cents). I know they are harmful, but YOLO 😊
[Yes, I just contradicted myself by merging Buddhism with YOLO]

Mumbai has a massive nightlife therefore we just forgot our tiredness and went out. I guess if I'd had to chose among the thousands of options that this city offers, I'd still be sitting and trying to figure where to go. But fortunately our friends from South America and Indonesia knew the party-market well already.
(According to me Mumbai is not only the financial capital of India, but also the party one.)

Ultimately, on our last day we have found Fashion Street and we have spent half a day on searching for interesting things, bargaining and buying cheap stuff. I liked the fashion jewelries most, but I couldn't say no to a bamboo flute either.

With the bits of energy we still had, we went to Crawford Market, one of the most popular shopping areas in Mumbai. Taking a walk around was an authentic Indian experience and the market has an old-world charm in a modern city. You can find everything starting from fruits and vegetables through household items to fashion items.

After taking the train back to our accommodation - without ticket, because we were unable to find the ticket counter in the crowd - as we were passing the street, a car almost smashed us. At the end it just smashed my phone, but it was still challenging not to despair.

Mumbai was not on my bucket list but except the unpleasant moments and consequences of my phone being annihilated on the last evening, I really had a good time. Mostly thanks to the people, to the random moments, to the flow. And I took a step forward in handling hazard.

How good friends are you with hazard?