I have heard a lot of pros but much more contras against traveling alone. A bunch of people said they could never imagine going on a trip just by themselves. And everybody advised me not to travel alone in India, as it is very dangerous for a woman. "Safety first."

But on the second weekend after my arrival to Chennai I had 4 days off. And everybody I met in the first days had plans already. So I had to choose between staying home or traveling alone. I didn't hesitate too much when I decided on the latter.

As for me traveling alone is exciting; it is a road for self discovery and a way to become more aware of my thoughts and reactions. Plus I really love that I can do whatever I want with my time and do whatever spontaneous things cross my mind.

Thursday morning I started off to the closest bus station without knowing exactly how will I get there. But - maybe because I haven't really thought about the options - everything went very smooth, from getting to the bus station and finding the right bus until arriving to a place I didn't know too much about.


My first stop was Mahabalipuram.

Or  "Mahabs" as locals call it.


This small city with rich history is about 50 kilometers South from Chennai and it definitely has a kind of magical aura thanks to its caves, temples and boulders, to Krishna's Butterball and Arjuna's Penance, and its friendly stone carvers and merchants.


I went to Mahabalipuram without expectations, so the views and the atmosphere really surprised me. I felt like stepping into an ancient and enchanted world.


One of the "wow" factors was a big boulder called Krishna's Butter Ball or Vaanirai Kal which seems to defy gravity. Although it looks like it could roll down any moment, all attempts to move it were in vain. Of course, people love taking pictures with it. I restrained myself.😅 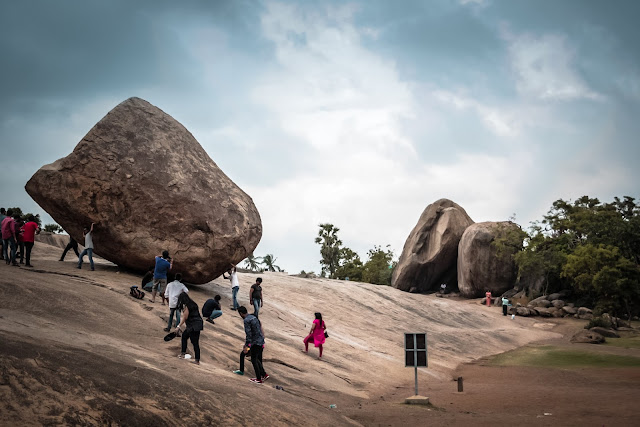 The cave temples - dedicated to various Hindu deities - also fascinated me with their carved sculptures; although I couldn't understand whom and what are they representing.

I spent the day walking around the place, admiring its beauties and talking to local people.


The best conversation I had with a stone carver, Deva, who even did a bit of palm reading for me. And before I left he gifted me a small Ganesha sculpture to bring me luck and success.


Since then he is my most loyal companion in India.

I keep him in my bag in a small box (and I hope he doesn't feel to uncomfortable).😊

Ganesha is the Hindu god with elephant head, the son of Shiva and Parvati, known also as the Lord of Success. He is one of the most important gods.
You can read more about him here:

Before sunset I went out to the beach.

And I got my first bindi from this girl


(who actually was a good dealer despite her fragile age and charged me a lot for that small red dot).

It was too late to visit the famous Shore Temple, which is overlooking the Bay of Bengal, so I just enjoyed the breeze of the sea before it got dark.

And I was surprised by the crowd that stood at the seaside watching the waves and the slowly setting sun.

I found a vacant beach as well, which had a bit of boheme atmosphere and reminded me of Vama Veche, the southernmost point of the Romanian Black Sea, and a hub for both hipsters and hippies.


Unfortunately the day was too short to visit everything, as I usually I don't like to rush myself and I often lose the sense of time. However I felt that I saw so many beauties in one day and received so much positive energy that I should be nothing but grateful.

My journey continued with visiting Pondicherry and Auroville on the next days, but that is already another story.

What are your experiences of solo travelling?