On the plane from Abu Dhabi to Chennai I was sitting near an Indian woman who was traveling with her daughter of only a few months. She was from Delhi, but for the past few years they have been living in the Netherlands. When I told her that I am going to live in South India for the next 6 months she said: I don’t want to discourage you, but I think you will have a hard time. Because of food. Mainly.


Even without this comment, I was concerned about the food (even though I went to a few Indian restaurants before in my life). Everybody was warning me that it will be way tooooo spicy for me. And that I’ll have to be careful what I eat. Because food is not as hygienic as the one I am used to.
But still, I wasn’t feeling discouraged.

When I was 14 I became a vegetarian in a town where being one had no culture. I got a lot of criticism and warnings when I’ve changed my diet. Like “you will get sick”, “you can’t survive without meat”, “we were meant to eat meat” etc. But I was stubborn. And not just that I survived but for the past 10 years I’ve hardly gotten sick. Just fatigued.

After I came here I’ve realized switching to vegetarianism was rebellion. I was rebelling against my culture. I’ve become aware of this when I saw people who were supposed to be vegetarians but for some reasons they liked eating meat. Even if after eating it they felt like they have sinned.
Rebellion. And the desire to be different.

Since I moved to Chennai I’ve become less strict about my vegetarianism (isn’t it ironic?).

Getting back to the point. I was scared about spicy food. My worst case scenario was that I will live on fruits, vegetables and nuts for 6 months. Basically living like a raw vegan.

On my first day I tried an authentic Indian meal at a restaurant called Bombay Halwa House. It was spicy but manageable. And I was afraid of getting sick (of course). I was watching when I start feeling a change in my body.

We started with tomato soup (that’s common so no need to explain), thali (see on the right, read more about it below) and gulab jamun (a very sweet sweet). With mouth freshener seeds (Mukhwas) at the end (I love that). I tried eating with my hand and I really had to concentrate as I knew I shouldn’t touch the food with my left hand according to Hindu traditions.

Then the second and the third… then the first week.

After more than three months and several tries I still have luck. Or I don't know what. The point is I haven't got sick. (Yet? 😬)
Sometimes I tried street food also. Or buying from more or less suspicious places. Because in India the streets are full of shops selling most often snacks and street-food. Streets are really alive. It is always happening something around.

How do I find Indian food? Actually delicious. I got even used to spicy things (but not very spicy though).

The best part is that actually here (in Chennai at least) it is easier to find my kind of food than home. As here more restaurants serve just vegetarian food (so I am broadening my cooking spectrum). In the mixed ones they always mark the food (green is usually without meat, red is with meat). I guess meat-eaters here face similar issues as I was facing home (mainly the variety problem).

My top list of South Indian food (or what should you try if you come to India):

I love all kinds, including naan, chapati, roti, parota, dosa. These usually come with a sauce or more sauces; South Indian food is based on breads (or rice) and gravies. If I have to choose one from these it will definitely be dal makhani (a gravy made of lentils), with garlic naan. Unfortunately I don't have a nice picture of it.

I like thali because it contains a variety of dishes and usually is served on a round platter. The idea behind is to offer different flavors: sweet, salty, bitter, sour, spicy... Typically includes rice, dal (drid, split pulses), vegetables, roti (bread), papad (thin, crisp round-shaped snack), curd (yoghurt), small amount of chutney (sauce), pickle and a sweet dish.


Chaat
I tried chaat in Bangalore for the first time; 4 types but - as I was a beginner - it was hard to discover the difference between them, although their names sounded very different. 😂

Chaat is a type of snack that is sweet, sour, spicy and salty at the same time. It might sound odd, but they are delicious (at least the ones I've tried).
The common elements are a base (fried dough), sauces (chutney, yogurt), vegetables (onions, tomatoes, potatoes) and umami (a sprinkling of chaat masala, a spice blend). 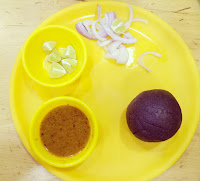 Ragi (or finger millet) is the brown ball. You cannot find it everywhere in India, only in Karnataka and in some regions in Andhra Pradesh. So it is kind of special. It is served with gravy and two other popular items of the Indian cuisine: lime and onion. Sounds funny, tastes special and it is said to be healthy. The craziest thing is that you are not supposed to chew it, just swallow it. 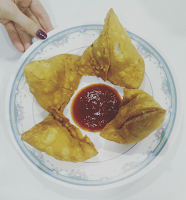 Samosa. Excellent as breakfast, to spice up your day.

Jalebi. A sweet dessert. Just watch the movie Lion (if you haven't seen it till now) and you'll want to taste it. 😉 A la recherche du temps perdu.

Paan. Not the Greek god, but goodies wrapped in a betel-leaf. A mouth-watering and refreshing dessert with a delicious taste which comes with a mixture of many ingredients. And you should chew it for a few minutes. It freshens your mouth and has a digestive aid as well.

Beverages (or how to survive the heat):

Right from the street. I would like to have it each and every day for the rest of my life.

A delicious beverage similar to a shake. I love drinking it after spicy food as it has a cooling effect.

Of all types. Mainly because I can try with some exotic fruits as well. Like dragonfruit.

The process of making it might look strange, but it actually gives you energy.

I tried traditional South Indian food, served on banana leaf on the ground (with belated thanks to Sheela mam who invited us to her house).

Besides Indian food I fell in love with Malaysian and Chinese cuisine. I even learned a bit of how to cook Chinese food (thanks to my ex-flatmate Jia). All in all living in India is a nice multicultural experience, food is less scary and spicy than I thought before. However a negative aspect is that in almost every food they put (too much) sugar.

Do you have a favorite Indian dish?